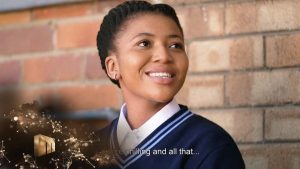 Biography, age, real name and net worth (salary) of Velile Makhoba’s ‘Gugu’ aka Zaza From Gomora.

How old is Zaza From Gomora? Velile Makhoba was born in 2001 in the KwaZulu-Natal Province in south Africa. She is currently 20 years old. Growing up in MayVille, she fell in love with traditional dance whilst still in primary school. She attended Cato Crest Primary school where she met and fell in love with the dance style. She was taught Zulu dance and Umshado. These cultural forms became her inspiration as they taught her about the history of her culture.

The South African SoapVille that has put on everyone’s lip tagged ‘Gomoro’ has continued dominating and gaining international recognitions, but of course we cannot help but notice the flair of one of the newly added characters Gugu.

The character Gugu was played by Velile Makhoba. The south African actress and traditional dancer hails from MayVille in Durban. She is best known for her enchanting role as Gugu in the Mzansi Magic drama series, Gomora, she was also a cast member on the etv series ‘The black Door’. One thing the rising star does well is to impress Mzansi fans.

She made her onscreen debut during the highly anticipated glamorous Gomora Thati and Phumlani wedding. Gugu on Gomora is the late Mbongeni Ndaba’s daughter he had outside his wedlock, she grew up in the guardianship of her uncle Phumlani.

On Gomora, Velile Makhoba’s ‘Gugu’ character is a teenage girl who distaste Thati and accuses her of keeping her father Mbongeni Ndaba away from his family. After her mother dumped her at the Ndaba doorstep, she grew up with her paternal grandparents and her uncle Phumlani. Gugu’s anger towards Thati and her daughter Bhule is justified, she accuses them of plundering her father’s money, flaunting it on social media.

In 2009,Velile joined a dance group called Izintuthwane which went on to perform at the opening of Nedbank Final cup. She has performed in various countries including India, Germany, Italy, to name a few. She is part of Nandi the musical by Kcap, as well as Mbuso Khoza’s African Heritage Ensemble.

The budding south African actress unmatched flair is making her a fan favorite in the SoapVille. She has amassed for herself a special recognition in International Performances Award. Velile is on the road to owning her own dance production company that targets young people.

The rising star is married to her career and she is definitely soaring. If she ever has a lover then she’s doing a splendid job keeping him under the radar.

Zaza From Gomora Net Worth 2022

From her acting and dance gigs, the actress is worth over R100,000. This is just the beginning for Velile and she aims to soar even higher! We’re definitely here for it.