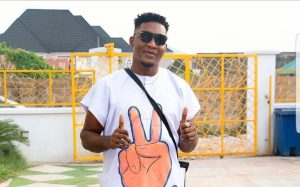 “You want to bam bam, you want to chill with the big boys? Now you dey run kiti kiti you dey run kata, no fit drink water drop cup” These lyrics to this song rang on the lips of both the old and the young! It was GLOBAL! It was a song everyone round the globe vibed to, and it made a massive trend upon trend on Tiktok. If you don’t know the words to this song then you’re probably a day old!

Ameno Amapiano (Remix) is no doubt, the tune of the season and the perfect national anthem for the ‘Detty December’ vibes of last 2021 December. The song made a massive hit in the airwaves, but sadly little or no attention was being paid to the artiste behind the song.

Fast rising Nigerian singer, Bright Goya, with the stage name Goya Menor, is the star behind the hit track.

Not many are aware that the 26 year old singer, an alumnus of Ambrose Ali university, Ekpoma, Edo state Nigeria, originally released the track on June 16, with his management spending heavy funds for the song promotion to no avail for over 6 months after its release. But Good news! It was until December 2021 did the track began to gather momentum and surpassed even the shores of Nigeria. The champions league even used the track on its official tiktok account.

The multi talented singer, rapper, hype man, and Mc’s first and biggest collaboration was with Nigerian music star, Erigga on his 2016 track ‘Make I Yarn ‘.

Goya Menor’s last single was released in 2020 but it was a flop. The devastated singer almost gave up but gave music another push with Ameno Remix release. Talk about some luck!

Goya Menor, who is a sociology graduate told premium Times that the song was recorded to educate the youth about the dangers of social vices like cultism and prostitution. The song amassed millions of views on YouTube and other online streaming platforms.