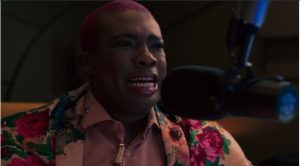 No doubt, many people, not just in South Africa but in the whole world knows about the popular company Netflix.

Netflix, is a company based in America, it is a subscription video streaming service and also a production company.

It started operations on August 29, 1997, it gives users the chance to stream any film and television series via the distribution deals and also through its own productions called Netflix Originals.

It is one of the most used film streaming services. So, our point?, Securing a role in a movie which will air on Netfix is just a great achievement as it will for one reason be featured through out the world.

South Africa’s Thami ‘Dish’ did it.

Thami ‘Dish’ Kotlolo was born on April 8th, 1995, he a gay South African best known and popular for the creation of a unique award show called Feathers Awards.

He is a young South African who began his career as a young TV presenter and actor while currently serving as the CEO aka Chief Executive Officer and sole founder of a top communication in South Africa, and also an event management company called Quad Republic.

Thami also is a philanthropist as he is the founder of Thami Kotlolo Foundation, a non-profit and non-governmental organization who aims at helping gays in South African

He debuted as Luke on the Netflix series called Justice Served, on the movie theme, he seems to has been inconsolable as his wife’s murderer was acquitted.

On a fateful day, he wakes up in a space that looks like a room while he the room has an electric chair in it. His wife’s murderer was brought into the room and strapped on the chair, however, Luke has to make a difficult decision.

Check out the promising movie on Netflix when it gets released officially.