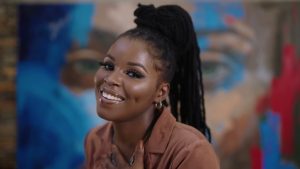 Right now, anyone in South Africa, who loves to listen to amapiano or even wants to create some amapiano sounds must have heard about the name, Nkosazana Daughter.

Since the conception of amapiano music genre from South Africa, the music genre has been growing and spreading out like wide fire, thanks to the makers of the tune.

Over the past 3 years or there about, we have seen many South African artistes who sprang up and began to make some heavy pathways in the South African music industry through amapiano, in fact it is not only limited to South Africa, but to some countries in Africa and even beyond.

One of those great names that come to mind when ever one thinks about amapiano is Nkosazana Daughter.

Nkosazana Daughter is a native of South Africa and her biological name is Nkosazana Nolwazi Kimberly Nzama, she is but just is a 21 year-old female South African Amapiano singer.

She has been in the amapiano music industry for just about a year, at least when we knew about her, and she became a notable voice in the industry when she partnered with Master KG to share their anticipated song together which they titled Nguwe.

One of her recent songs has been the favorite of many of her fans as she really did a great deal of work on the song. The track is titled Uthando.

The amapiano song Uthando is an amapiano single which Nkosazana Daughter did with the help of a grand master in the SA music industry, by the person of Master KG.

Though the song was officially dropped late last year, yet the song has been in the minds of amapiano fans as people still use the sound to create some short videos especially on TikTok, and other social platforms.

Nkosazana Daughter took to her YouTube channel to share the single together with Masker KG, and now the song has about 11 million views just on YouTube.

Intelligent and smart artistes are not common, but are rare to find, Nkosazana Daughter is an amapiano artiste we should look out for from this year 2022.