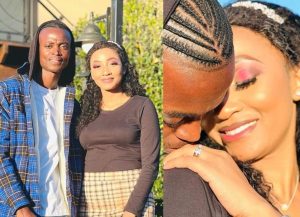 King Monada Proposes To His Girlfriend After 6 years

Who in Africa does not know King Monada?

He is the first South African to drop a song that hit across the African continent, with his “falling” song? He is a living legend.

Khutso Steven Kgatle is the real name of the South African house singer.

He is better known by his music title King Monada.

He has been a very hard working lad, and has been in the music industry for quite some time, however his story changed i 2016.

The young South African singer rose to fame when he dropped a singles back in 2016, these songs “Ska Bhora Moreki” and later dropped “Malwedhe” back in 2018.

The later blew out like wild fire as it peaked at #9 on the iTunes Chart and also seated on #54 on the Apple Music Chart.

Malwedhe aka “the falling song” was dropped in late 2018, where people tend to fall while singing the track, the song sang and acted out in all countries in Africa.

He is loves singing in his native language, the Khelobedu language, this is the local dialects of a South Africa village, Northern Sotho.

King Monada Proposes To His Girlfriend

The South Africa hit maker, King Monada has finally proposed to his second lover and interestingly, they have been together for 6 years.

He shared nice pictures from the proposal, he also penned down a very emotional and heart warming note.

He said, and we quote; “If I had a flower for every time thought of you…I could walk through my garden forever. It has been 6 years, and ultimately She said YES. I promise to be a good partner to you, my love,”.

Well, his fans (which includes us) jumped to his comment section on the page to congratulate him, however, it is quite confusing as he already proposed to another lover few months back, so a few questioned why proposing again?