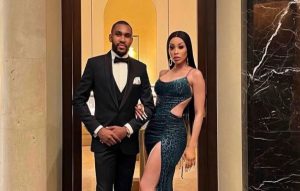 Actually, it will be the wish of every young couple to be resident is the world most booming economy and also a center of attraction.

We mean to say, many young couples like Khanyi Mbau and Kudzai will love to be residents in Dubai, but that it not an easy wish.

Khanyisile Mbau is a South African who is professionally known as Khanyi Mbau.

She is a South African singer, actress, TV presenter and also a socialite. She was born and raised in Soweto South Africa, Mbau became a known figure as a second Doobsie which was in the year 1997, in SABC’s soap opera movie called Muvhango. She debuted as Mbali in the SABC movie series.

She, yet featured on opera Mzansi and also on SABC 1’s mini-TV series called After Nine.

Kudzai Mushonga on the other hand is a popular and renowned Zimbabwean business man.

Interestingly he has been on the internet for some time for both good and bad reasons.

For one, he has been involved with his lover Khanyi Mbau, who happens to be a famous South African female singer and also an actress.

Well, be that as it may, the duo are living their best life in Dubai.

About 1 year ago, the duo talked about relocating to Dubai permanently, however the female celebrity and actress was back and forth mostly from South Africa to her her town then back to Dubai.

On their Instagram page, the captioned… “Tonight marks a year as Dubai residents. #365 it started out shaky but it was all worth it! To the most high we thank you for all our success,” the post was made by the actress.

She took to her social media on Friday, to paint her page with the luxury brand she loves the most.