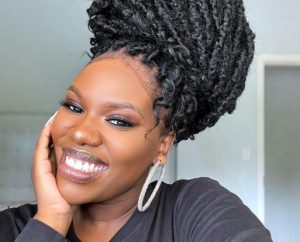 Gugu Gumede Celebrates 4 Months Of Being A Mother

Who understands the pains and joy of being a mother, better than a woman who has being on the path of pregnancy and child-bearing?

Well, Gugu Gumede is filled with joy as her daughter marks 4 months old. Congratulations to both mother and little baby.

She is a young and promising South African actress and socialite, she was born and raised in the Province of Natal in South Africa.

Gugu became a notable figure while she took on the role that portrayed the character of a prophetess named, Mamlambo, in a soapie movie, Uzalo.

Like we stated earlier, she was born in South Africa, in province of Natal. Sadly as it is, she is an orphan as her father is late, her dad was the late Simon Hulumeni Gumede, same as her mum, her mum’s name was Zanele kaMagwaza-Msibi.

The female South African actress actually studied acting in Los Angeles at the American Academy of Dramatic Arts, how beautiful.

A reason she acts so well on TV.

The celebrity decided to celebrate her baby on her social media platform, Instagram.

Back in March 2022, she was delivered of a new baby and now in July marks it the 4th month of the baby’s birth..

Taking to her Instagram page, she shared beautiful photo of her baby as she’s with her little girl.

On her Instagram, she wrote, “I was made to love you”, she also added, “Aunties and uncles, our little one is now 4 months old! Very soon, we will be marrying her off.”