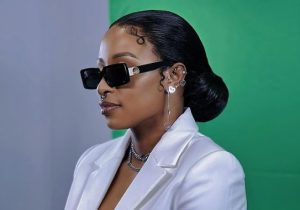 Talking about South African beauty, especially when it comes to entertainment or music, a name will surely come to your mind, DJ Zinhle.

It is great to reveal that in South Africa, people’s talent are recognized and they easily flourish irrespective of age status, gender or colours.

It a great thing to behold.

Ntombezinhle Jiyane is the real name of the South African female entertainer.

Zinhle was born on the 30th December of 1983. She is officially and professionally, South African DJ, music producer, TV personality and also business woman, she is well known by her music name DJ Zinhle.

It is no secret that the female South African celebrity has also went on to have a career in acting. She had showed up on TV as judge in a movie called Jika MaJika, also featured in Idols South Africa, Turn It On, and also in1’s and 2′ just last year 2021.

She also made an appearance as a guest actress on the television series called eKasi: Our Stories back in 2011, and a year later featured in Play Your Part in 2012, same year she featured in Tropika Island, subsequently showed up on The Close Up, and and then Rhythm City.

Interestingly, DJ Zinhle has been reported to has been chosen as the cover girl for the popular magazine in South Africa called Glamour magazine.

She revealed this information through her social platform.

Zinhle revealed she feels excited and honored at the same time, with the opportunity given to her, she also has been the cover girl for the year’s beauty issue in relation with Finesse Scent.

She wrote on her Instagram and said: “A Cover Girl

I’m so honored to be featured as the cover girl on this year’s @glamour_sa Beauty Issue in association with @finesse_scent. Available now at selected stores Nationwide #TheFinalStatement #GLAMxDJZINHLE”