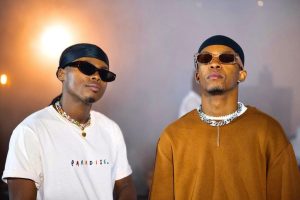 Can’t Get Enough Of Black Diamond’s Summer Yo Muthi

South African is blessed with unique and energetic singers who proudly display their musical talents, and their songs? Top notch and hard to die off.

When talking about some of these quality artistes, singers like Black Diamond whose name is also spelt as Blaq Diamond comes to mind.

The two artistes which make up Black Diamond was said to had met back in school trip, in 2010 where they both took part in a music cypher right in their school bus. They then signed with the best record label called Ambitiouz Entertainment, they both subsequently dropped a studio album which was titled Inqola in 2017, their first project immediately rose to become their first iTunes number one project.

After the album release, the duo released another single with which sealed their position as top South African singers, the track “Ibhanoyi” was dropped back in 2019, the same some received later bagged them the “SAMA Record of the year”.

A year after the single, they came through with yet another studio album Umuthi in 2020, which housed two platinum selling songs “Ibhanoyi” (which was dropped the previous year and then “Love Letter”.

In June 4 2021, they dropped a great single called “Messiah” the song as assisted by Dumi Mkokstad. The song was able to get atleast 3 millions views just on YouTube their official YouTube channel.

Few weeks later, they dropped off a single, “Italy” which was released in October 2021.

Till date, 2022, their song Summer Yo Muthi has been one of their best, and it has some touches of amapiano vibes infused in it, and it still sounds fresh whenever it is still played.

The duo has the song currently uploaded to their official YouTube channel.

Stay with Fakaza2022 for more,